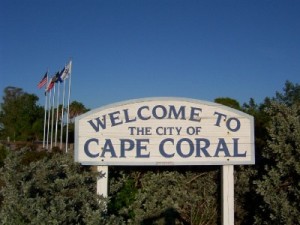 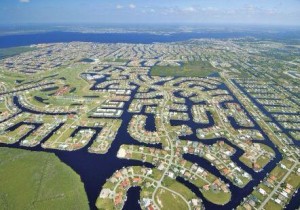 Cape Coral is a vibrant and friendly community with all the beauty that you expect from Southwest Florida. With over 400 miles of salt and fresh water canals, it is a boaters “Paradise”.

Lee County, Florida, United States, on the Gulf of Mexico. Founded in 1957 and developed as a master-planned, pre-platted community, the city grew to a population of 154,305 by the year 2010. The city’s population estimate was 165,831 for 2013. With an area of 120 square miles (310 km), Cape Coral is the largest city between Tampa andMiami. It is a principal city in the Cape Coral – Fort Myers, Florida Metropolitan Statistical Area. The population estimate for the statistical area was 679,513 for 2014. The city is known as a “Waterfront Wonderland”, since with over 400 mi (640 km) of navigable waterways, Cape Coral has more miles of canals than any other city in the world.

Cape Coral is made up of 114 square miles of land and is the largest city in Southwest Florida and the largest between Tampa and Miami. With golf courses, tennis courts, boat ramps, athletic parks, natural preserves and more, the quality of life in Cape Coral is second to none.

The City of Cape Coral has some of the best parks and recreation programs in the state, providing all types of activities and programs for young and the young at heart. To satisfy the cultural and recreational needs of a diverse population, Cape Coral residents and visitors are within easy reach of all sorts of activities and amenities. Shopping and dining; theater and art; sports, from children’s leagues to professional team; clubs and organizations that appeal to just about every taste and hobby; and environmental activities, from kayaking to visiting our burrowing owl neighbors.