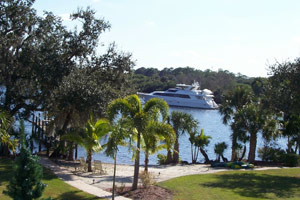 Alva is a census-designated place (CDP) in Lee County, Florida, United States. The population was 2,182 at the 2000 census. It is part of the Cape Coral-Fort Myers Metropolitan Statistical Area.

Alva is the oldest settlement in Lee County.  It has a unique country flavor that is rapidly becoming hard to find in Florida.  From the magnificent sunsets over the Caloosahatchee River to the majestic oaks draping their moss-laden limbs over the center of the village near the banks of the river.

People who live in Alva say it is more than a place: it is a state of mind. Take Exit 141 and head east on State Road 80 toward LaBelle. After about 11 miles you will come to a little crossroads called Alva. A convenience store on the north side of the highway is your landmark. Turn left at the flashing light and cross the old bridge over the Caloosahatchee River. Turn right on Pearl Street, and you are in the heart of Alva Florida.

A lot of people assume the town got its name for a famous nearby winter resident: Thomas Alva Edison. This is not the case, however.

A sea captain from Denmark named Peter Nelson came up with the name. He bought a large tract of land and laid out the original village in the late 1800’s.  He admired a small white flower that grew in the area. It turned out our sea captain was also a botanist, and he recognized the flower as The Alva Flower, also known as sabatia brevifolia Rafinesque.

The first bridge across the Caloosahatchee was built at Alva in 1903. It became quite a busy little town, with a couple of hotels and several houses. Like many Florida towns of that era, it’s life revolved around the river.

You need to log in to use member only features.